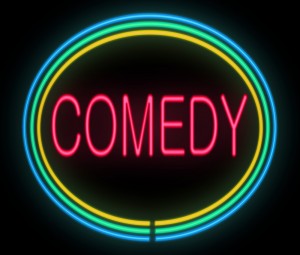 Several years ago I was asked to be a panelist at a meeting of the Cleveland chapter of the ITVA (International Television Association). The subject was comedy writing and the place of comedy in corporate videos. In the course of preparing for the panel I began to formalize a theory of comedy and as the program was winding down I offered to share it with the audience. When I was through there was general silence, but in a good way, and some people actually said, “ah-ha.” So here’s the theory:

And one of the brain’s favorite things to do (other than the aforementioned “you know”) is laugh.

So what is it that the brain thinks is so funny? What is a laugh?

Timing is everything.
Funny/Comedy/Humor is the result of a bio-chemical process in the brain that is caused by the reaction of two conflicting emotions: surprise or fear, followed by understanding or relief. For something to be funny, this reaction must take place in rapid succession. We’re generally not talking about hours later. (Although it took a while for “a wooden leg, named Smith” to work – then it killed ‘em!1)

The brain is confronted with conflicting information: a set-up followed by a punch line. The set up leads down one path. The punch line takes a detour. For the briefest of moments the brain is surprised and confused. A millisecond later it understands the bait-and-switch. Confusion yielding to understanding is pleasing to the brain. And the brain being… well, you know… decides to replay the process because it felt so good. So it tells itself the set up and the punch line over and over in rapid succession to relive the experience. And the sound that it makes when it does this is called laughter.

Laughter can also be the result of fear followed by relief, which is why people often laugh after a close call with a dangerous situation. That’s why slapstick is funny. The classic banana peel or any of the Three Stooges (especially Curly) getting hit with a hammer. We fear for their safety and are then relieved that nothing bad really happened. So we laugh.

People laughed when Henny Youngman said, “Take my wife… please!2” A set up leading down a path where the brain thinks he’s going to provide an example. Then the punch line that turns the set-up in a totally different direction. The brain is confused, then… oh, I get it!

A little confusion leads to a chuckle. A big switch means big guffaws. If the gag includes something sexual or something not politically correct or something vulgar, you add a second element of confusion to the mix (“I can’t believe he just said that!”) that can leave you gasping for breath.

Weeping from laughter, having Coke squirt out your nose, or wetting yourself are not, in themselves pleasurable experiences. They are simply examples of the brain being too wrapped up with itself to adequately control some of the other bodily functions.

While not everyone understands this theory of laughter, everyone knows that laughter is good. Laughter is a universal language. That’s why false laughter is such a regular component of conversation. We fake laughter to make people think we understand, we are in control, we are not confused or fearful, we get it.

Unfortunately, funny does fade with time. The surprise is gone. So the movie gag you loved when you first saw it… and second, third and twentieth time, just doesn’t have the same effect any more. Even when you haven’t seen Animal House for a long time, the sight of Belushi smashing the guitar in the stairway3 makes you smile, but not laugh the way you did once. The best funny things age in the mind like fine wine, continuing to mellow and provide mental pleasure for years. A personal favorite:

How many writers does it take to change a light bulb? Ten… one to change the bulb and nine to say, “I could have done that.” 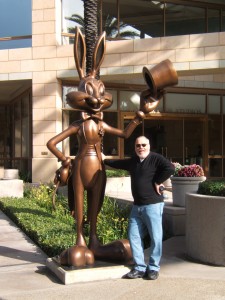